As they report the negotiations of a new contract for Florentino Luís at Benfica, it’s claimed that Pep Guardiola’s side are now very unlikely to land the midfielder soon.

Manchester City had made an approach to know the conditions to sign the player, and heard that they would have to trigger the youngster’s €60m release clause to take him from Lisbon.

As the Premier League side only wanted to pay €35m, that made the deal impossible. Benfica president Luis Felipe Vieira would even accept to negotiate a fee, but Florentino would have to spend one more season in Lisbon for that to happen. 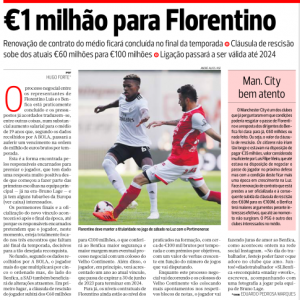 Now with a new contract, which is ‘practically’ agreed, Florentino’s release clause is going from €60m to €100m.

A Bola says Benfica now have a bigger margin to negotiate, and unless Manchester City come up with a much bigger bid, they are not taking Florentino anytime soon.