The Italian media continues to insist Victor Osimhen is a much wanted player this summer, with Manchester United now the club being linked the most.

Stories of interest in the Napoli player initially concentrated mainly on claimed interest from Newcastle United, with Arsenal then taking the leading role for a couple of weeks.

Now it’s the Old Trafford club pushed forward the most, and Monday’s edition of Corriere dello Sport does just that.

The newspaper says Manchester United have now initiated contact with Napoli to find out the price for Osimhen. They’ve been told the Serie A club want €110m, but that price is negotiable.

Still, it’s a huge amount for the 23-year-old, who has scored 17 goals and added 6 assists in 30 matches this season, missing a chunk of games after picking up a nasty cheekbone fracture.

It would easily be the club’s biggest signing of the summer, given the figures mentioned.

Manchester United may well remember being linked with Napoli’s Kalidou Koulibaly, around the time the club purchased Harry Maguire. At the time, there were claims the Red Devils had offered more than €100m, and that didn’t feel fully believable. 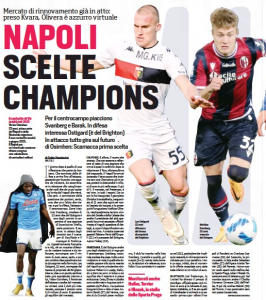 A similar situation is building with Osimhen, and there’s even been claims in Italy that Newcastle offered more than €100m in January, something which again seems questionable.

This would appear to now be something Napoli do when they have a much-wanted player… hype his value and hope a club will feel the same way.