That’s according to Marca, who say the Spanish club are yet to finalise a deal for the Dutchman despite having an agreement in place.

According to them, Madrid have a verbal agreement with Ajax to sign the player and have a deal wrapped up with the 22-year-old as well.

He, however, remains ‘unsigned’ and there is doubt about whether they will end up closing the deal.

While Ajax are convinced it will happen, Zinedine Zidane has not ruled out another attempt at getting Paul Pogba from Manchester United, and thus the deal remains in limbo.

They need to avoid becoming ‘distracted’, though, as Van de Beek has ‘important offers’ from other clubs and may choose to go there.

One of those clubs are Manchester United, who Marca say are ‘doing their best’ to secure his signature, having been linked with a move for the best part of 12 months. 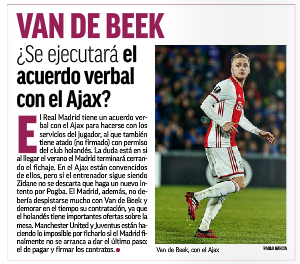 It seems, as always, it’s all dependent on Madrid. If they push for Pogba again, that would presumably free up Van de Beek to move to Old Trafford.

The obvious solution is that United finally allow Pogba to leave, thus taking Madrid out the equation and leaving them free to sign the Ajax star. Of course, whether anyone comes to that conclusion remains to be seen.

“Makes me a little sad” – Player reveals his one regret...

Carlo Ancelotti is ‘unexpected ally’ for transfer – Everton can do...