Home Premier League Arsenal ‘Options will not be lacking’ – Midfielder expected to leave Arsenal in...
SHARE

Arriving from Real Madrid on loan, there was hope Dani Ceballos would be the saviour in Arsenal’s midfielder; the man everything will revolve around.

It all started well, with two assists in his second league game against Burnley, but then results started to falter and an injury occurred.

It took Ceballos some time to convince Mikel Arteta to play him after Unai Emery’s sacking, and just when he managed it, after three consecutive league starts (all wins), the Covid-19 pandemic struck.

With no football to play and a future at the Emirates up in the air since there is no purchase clause in his loan, Ceballos is likely to return to Real Madrid when the season ends.

However, he won’t find a place there, as Marca in Spain make it clear it’s ‘evident’ he doesn’t fit in Zinédine Zidane’s plans, with the situation ‘identical’ to last year. 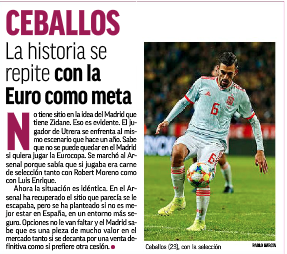 Although he has played at Arsenal far more than he would have in Madrid, the newspaper explain Ceballos has also ‘considered whether it isn’t better to be Spain, in a safer environment’.

Should that be the case, the La Liga giants ‘know he is a very valuable asset on the market’, but will have to decide if they want to sell him permanently or simply send him out on loan again, with plenty of suitors expected.

Marca state ‘options will not be lacking’, suggesting there’ll be widespread interest.

Ceballos is under contract at Real Madrid until 2023, so they still have some time to decide what they want to do, and with the Euros now pushed back a year, Ceballos will have to choose his next move carefully as he’ll still have ambitions to make Luis Enrique’s squad next summer.

Club will not ‘consider listening to any kind of offer’ from...

“Makes me a little sad” – Player reveals his one regret...