On Monday night, Marcos Rojo made an announcement on Instagram saying he’d finally be returning to Manchester United.

The Argentine media had already reported that Red Devils asked him to return to England, frustrating his plans to sign a new loan deal with Estudiantes.

Manchester United’s move was taken by surprise by many in La Plata, and the local press writes a little about the situation today.

Newspaper Olé says the Red Devils want to keep Rojo close to the club, so in case they manage to sell him or loan him out, it’d be easier to sort the transfer out. 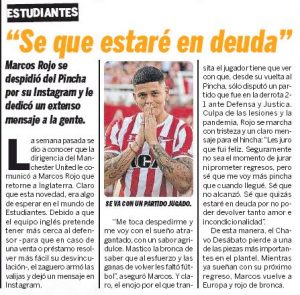 Despite the farewell text Rojo made to Estudiantes, in which he said he couldn’t promise a comeback, the Argentine side seem to still be hopeful of having him at the club again.

President Juan Sebastian Veron published a story on Instagram and showed a lot of love for the Manchester United defender.

“It was a little while, yes. We wanted to see you a little more. We all got angry and a little sad. But the joy of having you, that the Malvinas – your neighbourhood, the family and we could see you at least that while, nobody is going to take it away.

“I have no doubts that it’s a see you soon. We’re going to wait for you and receive you like the first time. You are still that unruly but sensitive kid, supportive, resigning and thinking about us, not about you. Thanks Marcos!”

Marcos Rojo will have to complete fourteen self-isolation on his return to the UK, with Argentina not on the current list excluded.