This week’s edition of SportBild mainly focuses on Bayern Munich wanting the defender and also mentions the English clubs.

It’s claimed the treble winners, who internally rejected his signing in 2015, tried to lure the 22-year-old to join them before he moved to Red Bull Salzburg in 2016.

The Bavarian club’s current interest in the Frenchman is ‘well known’ at Leipzig and the centre-back can see himself moving to Allianz Arena. However, they cannot make an approach before sorting out David Alaba’s situation.

Alaba is in his final year of contract and has so far not signed an extension. Hansi Flick’s side have withdrawn their last offer. The German magazine states it’s difficult for Bayern to get serious about Upamecano as ‘long as the Alaba exit’ is not sorted out.

As per the report, the Bundesliga winners are ‘running out of time’ because of the interest shown by United, Liverpool and City in Upamecano, and the Premier League clubs could ‘fix the deal in January’.

Upamecano has €45m release clause that will come into effect from next summer. If either United, Liverpool or City want to take him in the winter market, they will have to negotiate a fee with Leipzig, or they could instead pay the clause early and wait until the end of the season. 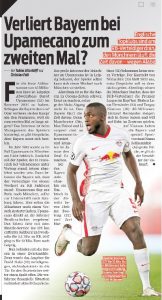 The Red Devils will look to strengthen the centre-back position in the coming transfer windows after they failed to bring in a new player in the same position during the summer.

Liverpool are without Joe Gomez and Virgil van Dijk, and will want to see how the pair recover.

City, however, may not bring in a new centre-back soon after investing in excess of €100m on Nathan Aké and Rúben Dias in the summer.