This week’s edition of SportBild has a big feature on Jadon Sancho to Manchester United, which is no surprise really.

Linked with the England international for over a year, the Red Devils clearly see a space for Sancho on the right side of their attack. Reports have been endless, and before today the fresh slant in Germany had been that Sancho could actually renew his contract with Borussia Dortmund, which would scupper a transfer.

There’d also been claims of a €150m asking price, something which seems unrealistic, especially as a flat fee.

This week’s edition says Manchester United want to ‘lure’ Sancho with the No.7 shirt.

Rather than talking about how he’d fit into the team, SportBild say United want to build an ‘international brand’ around the 20 year old, and they add it’s ‘a plan that is extremely flattering to the style and fashion-conscious youngster’.

Is that the start of the traditional BVB-exit character assassination? Maybe.

Manchester United ‘absolutely want to sign’ the player, and Dortmund and Sancho’s representatives both believe a ‘serious offer’ is on the way. 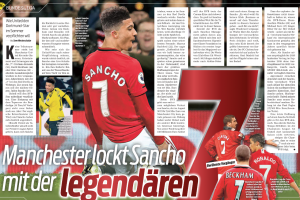 Getting another dig in, SportBild say BVB know selling to United would ‘strengthen an international competitor that has been left behind in sport in recent years’.

Dortmund’s ‘last hope’ of retaining Sancho is the Old Trafford club failing to qualify for the Champions League, given that the German magazine believe that’s essential for the player.