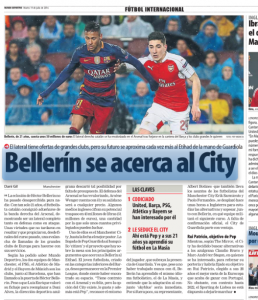 Manchester United and Manchester City have been dragged fully into what seems to be a building Hecto Bellerin drama, which may have very little basis in reality. Catalan newspaper Mundo Deportivo may be determined that if their beloved Barcelona can’t have Bellerin back, then they’re sure not going to let Arsenal enjoy him in peace.

In their Tuesday edition, Mundo Deportivo have a big peice on Bellerin and say he’s edging closer towards Manchester City and Pep Guardiola. Not only that, Manchester United, PSG, Atletico Madrid and Bayern Munich, along with Barca, have all ‘knocked on the door’ of Bellerin.

Mundo Deportivo say this is according to their own information, so it may well be a proud Bellerin relative or friend telling people in Catalonia that the world and his dog want to sign the player.

La Masia is of course brought into the equation, with Bellerin said to speak the same football lagnuage as Manchester City’s Pep Guardiola. There’s no detailed explanation of the Manchester United link, or what Jose Mourinho thinks about the situation.

Which will inevitably lead to more claims like this.