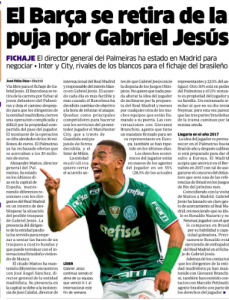 Barcelona have reportedly given up on signing Gabriel Jesus.

According to Spanish newspaper Marca, the Catalan club consider the transfer to be too complicated, and now leave Real Madrid, Manchester City and InterMilan battling for the 19-year-old.

Real Madrid would be leading the race, since the club have already attended to several meetings with Palmeiras’ director of football Alexandre Mattos. They would accept the player to stay at the Brazilian side until the end of the year, which is one of the demands from the selling club.

As the Galacticos try to close the deal before the start of the Olympics, Manchester City are said to be “decided” as they push for the move, but the newspaper doesn’t have any updates on the talks between Palmeiras’ and Pep Guardiola’s side.

They say that Barcelona have given up because the youngster would cost around €30m and Palmeiras have already turned down €20m offers. Maybe the extra €6m is agents and club fees, since Jesus’ economic rights are divided between himself, Palmeiras and two agents.

It’s always worth remembering that if City or Inter want to pay his release clause, that’s €40m, since they were not chosen by the player to have a discount on his transfer, in a clause agreed when he originally signed.

We all know that Marca has many reasons to put Real Madrid in front of others in a battle for a player, especially when Barcelona are involved. So we’d say things aren’t so close to be done as they claim to be.

But it’s interesting they say Manchester City are now likelier than Barcelona, despite the clause issue.