The January transfer window is now open, which means we’ll be hearing lots about Lionel Messi and, inevitably, Manchester City.

Messi is free to negotiate with whoever he likes as he is in the final six months of his contract at Barcelona and yet to sign a new deal.

Thus, the possibility of a free transfer in the summer is there, with the Argentine having pushed for a move last summer but failed to get one over the line.

Manchester City were, of course, interested at the time, with it widely believed they are one of the few clubs who could actually sign the Argentine superstar.

That remains the case and Sport present them as one of the four options Messi has in front of him, alongside a stay at Barcelona, a move to PSG or MLS.

The newspaper states that Pep Guardiola would ‘guarantee fun on the pitch’ and the chance to be ‘close to the titles’.

They insist that the ‘tense memory’ of some difficult moments that the pair endured during Guardiola’s time in charge of Barca has ‘faded’ and ‘only the sweet taste remains’. 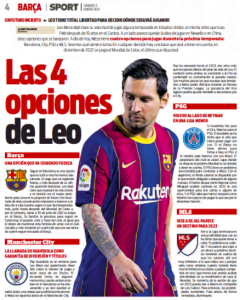 It is because of that that Messi thinks of renewing their relationship once again and contact between the pair is ‘constant’.

Indeed, Manchester City tried to sign him in the summer and Guardiola’s decision to stay at the club until 2023 would fit into Messi’s ‘life plan’.

It’s explained that ‘many pieces fit together’ to make the move a reality, with the presence of Sergio Aguero at the Etihad another element that could help him to choose City ahead of his other options.