According to Spanish newspaper Marca, the 21-year-old is expected to join Eusebio Sacristán’s side on loan in the ‘coming hours’.

The Ulldecona-born player made seven starts and had 13 more appearances from the bench in the league last season. The Spaniard has still two more years left on his contract with the Premier League winners.

Garcia’s form for Girona has not helped him to make it to Pep Guardiola’s preseason squad or even be considered for a place in the first team squad next season. 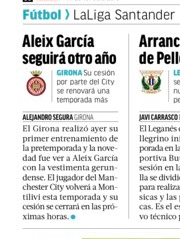 His lack of starts in the La Liga last season came when Pablo Machin was in charge at Montilivi.

Machin has left the club and has been appointed as the new Sevilla manager. Sacristán is his successor at Girona and the City player remains hopeful that he could play regularly under the new Girona manager.