We’ve lost count of how many times in the past month we’ve read that Sporting and Manchester City have reached an agreement for the transfer of Pedro Porro.

The move is still to be made official, and according to Portuguese newspaper O Jogo, it shouldn’t take a lot longer.

The outlet writes that the right-back should land in Lisbon by the end of the week and finally complete his transfer to the Lions.

Porro is expected to join Sporting on a two-year loan deal. The Portuguese side will pay a fee for the spell and a salary of €400k per season, which is part of his wages at Manchester City. 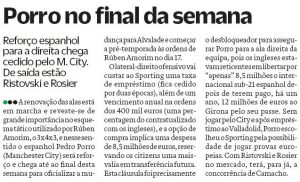 There’s also an option to buy him during his spell, which would cost Sporting €8.5m. In case it’s triggered, Manchester City would still have a percentage over a future sale.

Manchester City signed Pedro Porro in a €12m deal from Girona last summer. They loaned him out to Real Valladolid this season, and now should let him go without giving him a chance to play for the club.