Portuguese side Sporting are announcing Pedro Porro’s transfer from Manchester City today, according to local reports.

Newspaper O Jogo writes that the right-back landed in Lisbon yesterday. He visited the club’s facilities and also had his medical ahead of the move.

It’s claimed that he and his representatives also sorted the final bureaucratic details for the transfer, which is now ready to be made official by the Lions.

Pedro Porro is being loaned out by Manchester City for two years, and Sporting will have a chance to make the move permanent by triggering a €8.5m clause. 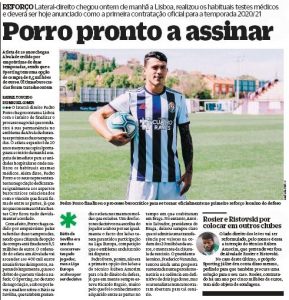 O Jogo says the Lions will pay the fullback’s salary, which is €400k net per season. They should spend about €400k more with taxes.

It’s claimed that Sporting had competition from Real Betis for the signing, and what made Porro choose the Lisbon side was their spot in the Europa League for next season.

Manchester City spent €12m to sign Porro from Girona last year. He was first loaned out to Real Valladolid in Spain, and now continues his career in Portugal.