Jan Vertonghen is expected to be announced by Benfica today. Following the end of his contract with Tottenham Hotspur, the Belgian international should be signing a three-year deal with the Eagles.

During the negotiations, the Portuguese media had already claimed that manager Jorge Jesus spoke to José Mourinho’s staff at Spurs to know more about the player.

Now that the move seems complete, it’s time for the local press to have a word with the Special One and see what he thinks of this transfer.

“He will be a great man to play in the Portuguese League. A big professional, a silent leader, an example in a work group. Fortunately I’ve met many throughout my career but Jan is certainly among the best,” José Mourinho told Record. 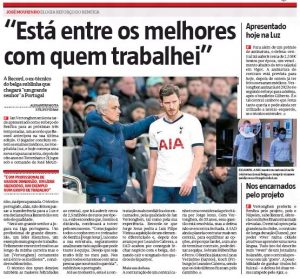 “As a player, everyone knows him and the Benfica coach, as well as his structure, certainly analysed everything he can bring to the team. I wish him to be very happy in my country. At Spurs we’ll all be behind a person who is very dear to us.”

Record writes that Napoli offered Vertonghen a more lucrative deal, but the player chose Benfica because of their project. They point out that he also liked a tweet which said the Eagles offered him a longer contract and a more attractive place to live.