Last week, we relayed news from France that West Ham were ‘leading the race’ to sign AS Saint-Etienne’s Jonathan Bamba in the summer on a free transfer.

The young forward is out of contract in the summer, and, if past negotiations are anything to go by, isn’t expected to continue with the Ligue 1 side beyond this season.

However, according to L’Equipe over the weekend, the French side were considering selling him in January, when West Ham’s interest was at its peak, only to backpedal when their manager pleaded them to reconsider. 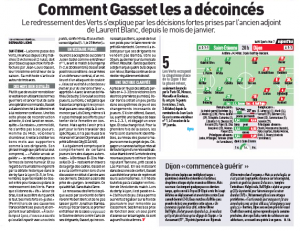 Jean-Louis Gasset is said to have asked his board to keep the forward, who has been key to his side’s improved form, including picking up two assists against Marseille in a 2-2 draw.

With seven goals and seven assists in 26 appearances at the age 21, there’s a lot of potential there, and that’s why David Moyes and co. will be keen to bring him in.

They missed their chance in January, but that’s unlikely to happen twice in a row.