Osmanlıspor general manager Ender Yurtgüven has told AmkSpor Badou N’Diaye is likely to move to the Premier League next week.

The Senegal international is expected to leave the Turkish club this summer, and he’s been linked with move to Crystal Palace in recent weeks after it was reported the player was heading to England.

Crystal Palace were initially set to bid €8m in January for the player, but Osmanlıspor didn’t want to sell mid-season.

Last month West Ham were also linked with N’Diaye after previously showing an interest in the last window. The Hammers tabled a bid of €5.5m in January, but this was rejected by Osmanlıspor.

The 26 year old is currently receiving attention from host a of top flight Turkish clubs, but the Osmanlıspor board member is adamant that they are not planning to sell N’Diaye to a domestic rival.

Yurduseven said: “We have an agreement in principle with one Premier League team. N’Diaye will speak with them in the next week. I think this transfer should be official by next week because we believe N’Diaye also wants to play in the Premier League.” 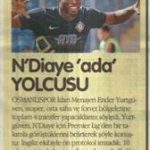 Osmanlıspor are reportedly demanding up to €10m for the midfielder, which wouldn’t be a concern for either Crystal Palace or West Ham.