Inter Milan allowed Zinho Vanheusden to spend last season on loan at Standard Liège and after he impressed for the Jupiler Pro League side, the Belgians signed him on a permanent deal in the summer.

Standard Liège paid €12.5m to acquire the centre-back’s services, but prior to securing the deal, Premier League clubs were after the 20-year-old.

Earlier in June, we covered claims from Belgium that Arsenal were ‘interested’ in the defender, but were unwilling to meet the Nerazzurri’s condition for transfer.

It was explained the Serie A side wanted a buyback clause inserted as a part of the deal, which didn’t please the Gunners.

Having been sidelined with an injury, Vanheusden returned to action in his side’s Europa League clash against Portuguese side Vitória Guimarães on Thursday.

Standard Liège manager Michel Preud’homme spoke to Het Laatste Nieuws about the player’s return and explained how his side had to beat the north London club in signing Vanheusden. 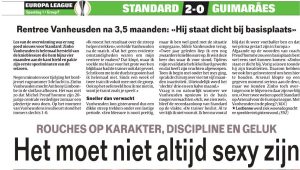 “Last season he showed his qualities. That is why we have invested heavily in keeping him here. At a certain point. Arsenal seriously knocked at the door, but we were able to convince Zinho to stay and we are happy about that,” Preud’homme said.