Home Europe “I have not said no” – Manager opens up over chance of...
SHARE

Newcastle United parted ways with Steve Bruce two weeks ago and are yet to appoint his successor.

Unai Emery emerged as a shock candidate on Monday, but the Villarreal manager stressed he knows “nothing about Newcastle” while speaking to the press the same day.

On Tuesday, multiple reports from England stated the Spaniard is set to become the new Magpies’ manager. There were even claims of their willingness to pay the €6m release clause that Emery has in his contract.

Newcastle’s ‘intention’ to pay the release clause is now backed by AS. The La Liga side were ‘put on alert’ when they ‘saw such an amount in the English press’ since this specific detail was ‘only available to two parties’; Villarreal and Emery.

The Yellow Submarine managed a 2-0 win over Young Boys on Tuesday. Prior to the Champions League tie, Villarreal president Fernando Roig admitted he has not been approached by the Tyneside club.

After the European fixture, Emery was quizzed about the reports linking him to the Premier League side and he has now confirmed Newcastle’s interest.

“There is nothing but interest. If there was something else, I would discuss it with Villarreal. It could go either way if requirements are met. I neither close the door nor open it,” he said.

“I have not said no to that interest. I would speak to Fernando and the club beforehand because of the great respect I have for him. It is not going to be prolonged, because it has no signs of prolonging.

“Anyone can receive an offer and appreciate that they are interested in your work. I have discussed it with Fernando (Roig).”

AS say the former Arsenal manager’s words ‘collide’ with the comments made by Roig regarding the Newcastle links.

“We are delighted with Unai and Unai with Villarreal. No one has asked me about Emery. Villarreal does not have any type of communication. I have congratulated Unai and we were doing the accounts of the group,” Roig stressed.

“I don’t know and everything in the future is future. They are three parts. We have a signed contract and I assume that he is delighted. A change of coach would not be good or healthy, but there is nothing.” 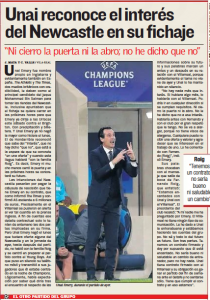 “Unai has a signed contract with Villarreal and his obligation is to win the weekend’s game against Getafe and not sit alone. He has to fulfil the contract and we are working on that.”

Clearly, Villarreal are annoyed after the €6m release clause that is in Emery’s contract was leaked to the British press.

This, and the manager confirming Newcastle’s interest will not please the Spanish club, especially after Roig kept insisting he has not heard from the Magpies.