Wednesday’s edition of Spanish newspaper AS claims Los Blancos coach has returned to the Santiago Bernabeu with more power and has already informed the 13-time European champions about his plan to reshape the squad in the summer.

In terms of incomings, the Frenchman has demanded three players and they are Eden Hazard of Chelsea, Manchester United star Paul Pogba and Paris Saint-Germain forward Kylian Mbappe.

The latter two are players Zidane had asked club president Florentino Perez to sign in the past. The midfielder returned to Old Trafford from Juventus in 2016 and the same summer, the La Liga giants were keen on the 25-year-old.

Real Madrid could not land Pogba because his agent Mino Raiola was an obstacle. It is now claimed the Spanish capital club will be provided with another opportunity. The Manchester United is ‘available again’ for transfer because he hasn’t settled at Old Trafford, which goes against all recent signs. 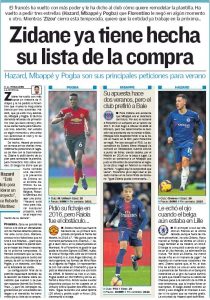 Pogba has two years left on his contract and at the age of 25, he could replace Toni Kroos, who has been struggling in recent times.

AS does not mention whether Manchester United are willing to negotiate and considering that he still has over two years left on his contract, it is unlikely the Premier League club will allow Pogba to leave in the summer.

The club also have an option for a further year.