It’s no secret Manchester United endured a difficult start last season and struggled in the first half of the campaign.

However, things were much better in 2020 and Ole Gunnar Solskjaer’s side lost only two matches in all competitions since suffering a 2-0 defeat against Burnley in January.

The upturn in United’s form this year coincided with the arrival of Bruno Fernandes from Sporting in January.

The Portuguese star impressed in his first six months in England, scoring 12 goals and registering eight assists in 22 matches in all competitions for the Old Trafford club.

The 25-year-old old gave a lengthy interview to A Bola, where he was asked about his instant impact at United, and also how he faced those who doubted him to perform in a top league.

“I think that in Portugal you talk a little bit about rivalries… more than exactly for being good or bad. People still have a bit of that thing of saying: if you are a Sporting player I cannot do well, I cannot say that you will do well,” Fernandes said.

“It was a good impact, because we managed to reach the Champions League and now our goals have to be different, because we have not won any trophy and a club like Manchester United, which in the last few years, didn’t win a trophy…”

“Even today I hear people saying, ah, he only scores from penalty kicks… But a little while ago, I saw the statistics and, except for penalties, only Kevin de Bruyne has a higher involvement in goals than me in England when it comes to midfielders.”

“…the penalties are there to be scored and they must be converted into goals.”

Out of the Portugal international’s 12 goals for United, eight of them came from spot kicks and Tottenham Hotspur manager José Mourinho aimed a slight dig at his compatriot a while back, stating he’s only ‘proved to be a great penalty taker’ since arriving.

“I honestly did not feel stung, I felt that I am a good penalty taker and nothing more,” he said, responding to Mourinho’s comments. 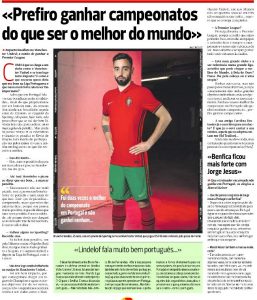 “I understand, but what I take from his words, because I’m a very positive person, is that he said I hit penalties well. It is a reality, not least since I arrived at Manchester United, I have not missed one. And I hope I don’t fail.”

“I’ve only missed two penalties, one for Udinese against Napoli and then in the Portuguese Cup, with Loures.”