With all the attention currently on the Lionel Messi saga, it’s easy to forget Manchester City have other needs.

One of them is at centre-back, which they’ve half fixed by sending £40m to Bournemouth in exchange for Nathan Aké, but they still don’t have the experienced Pep Guardiola wants in Kalidou Koulibaly.

Talks to that end appear to have been put on hold for the time being due to the ongoing saga surrounding the Argentine superstar, but their interest certainly hasn’t been forgotten in Italy.

We’ll start with Il Mattino, who are one of the local Naples newspapers, and their bottom line is that Aurelio De Laurentiis wants €90m for the Senegalese centre-back.

They say that’s already a ‘strong reduction’ from his demands a few weeks back, but the stubbornness shown by the Napoli owner hasn’t gone down well with Koulibaly himself.

It’s explained the player appears ‘annoyed’ at these demands, knowing full well ‘no-one will pay that amount for him’ in the current market.

What makes matters worse for the negotiations is Napoli are refusing counterparts to be inserted, wanting pure cash.

It’s a difficult situation for the player, who wants ‘a new adventure’, but he won’t make a meal out of it or force an exit.

He just wants something new, and it has to be abroad because a move to another Italian club isn’t an option for him, such are his links to Napoli. 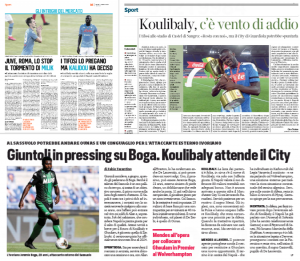 His dream is said to be Paris Saint-Germain, but their moves have been ‘too timid’, with the only real offer coming from Manchester City.

Koulibaly is said to want answers sooner rather than later, with a desire to start his new life ‘as soon as possible’, needing ‘certainties he currently doesn’t have’.

City, down their end, don’t want this to drag on, and nor does the player, which is why he’s ‘pushing’ his agent to get Napoli to lower their price to €75-80m.

At this point, Il Mattino explain the sacrifice of letting him go is ‘necessary’ and can ‘no longer be postponed’ because the club can’t afford to have players ‘wanting to be elsewhere’.

Moving onto Corriere del Mezzogiorno, the other Naples local newspaper, seem a bit more optimistic, explaining Manchester City are ‘pushing’ to get the Senegalese and talks ‘could accelerate’ at the end of the week.

Their view of the situation is a bit different, claiming De Laurentiis wants ‘at least €70m plus bonuses’ and ‘will not go below this figure’.

He’s still hoping for the likes of Manchester United and Paris Saint-Germain to turn up and get some kind of auction going, but ‘the most likely scenario is a transfer to the court of Guardiola, probably mid-September’.

That’s far more positive, and suggests we might get a bit more news come next weekend.

And if you’re interested to know what the major newspapers are saying, the answer is not a lot, as Corriere dello Sport merely state De Laurentiis wants €80m, but that figure hasn’t arrived and the Messi stuff is holding everything up.

Just like Koulibaly, it appears we’re all going to have to be patient on this one.