Two days ago, El Chiringuito in Spain reported that Manchester United were interested in Iñaki Williams and were ‘prepared to pay’ the Athletic Bilbao star’s €88m release clause.

The 25-year-old’s capability of playing anywhere in the front three made him an interesting option for the Red Devils.

Friday’s edition of AS claim United ‘thought’ about the forward as a replacement for Romelu Lukaku, who completed a switch to Inter Milan.

However, there were several factors that held Ole Gunnar Solskjaer’s side from completing the transfer.

The Premier League transfer window closed on Thursday and United had less than 48 hours to sign the Spaniard. This, coupled with Williams’ asking price and his desire to continue with the Basque side made the operation complicated for United.

Bilbao were relatively calm about the situation as Williams hadn’t communicated he wanted to leave the club. 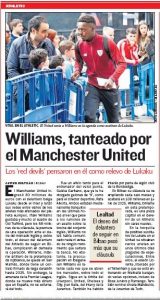 Williams has a contract with Bilbao until 2025 and AS report state the threat from English club will not disappear.

It’s also explained he remains in the orbit of United, Liverpool, Chelsea, Manchester City and other European clubs.

However, Williams cannot move to England until the next transfer window reopens in January.