According to Fotomac, Manchester United officials have allowed Fred to hold transfer talks with Galatasaray, with claims the Turkish club are closing in on a loan deal for the Brazilian.

Yesterday we covered claims from Turkey that Galatasaray are keen to bring in the player this summer as thy look to sign a central midfielder. Gala have seen senior midfielder Fernando and Badou Ndiaye leave the club recently.

The Turkish side have reportedly offered €2m to Manchester United to loan Fred, and the Istanbul club’s manager Fatih Terim wants to see him in his squad for next season.

Today, Fotomac claim Manchester United are open to letting Fred join Galatasaray and that he’s looking to leave the Premier League side in order to get regular football. 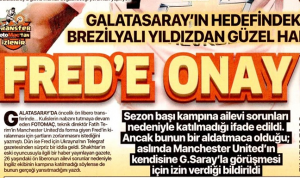 Fred joined the Red Devils last summer from Shakhtar but has so far failed to prove himself in his first season at Old Trafford.

The Turkish press often sound way too optimistic on occasions like this, and it would be a surprise if the player was allowed to leave on loan, unless multiple new faces are added to midfield.

The 25 year old made just 17 appearances in the Premier League last season and he’s under contract with the English club until June 2023.