Despite picking up the three points against West Ham at the weekend thanks to two penalties, a great David De Gea save and a fortuitous offside decision, Manchester United showcased, once again, some shaky defending at the back.

The Red Devils’ need for a new centre-back has been well documented in the past, meaning the press around Europe is having a field day linking names with a move to Old Trafford.

Needing both experience without spending over €100m on a defender, one of Manchester United’s best bets, and one they are apparently looking at, is Roma’s Kostas Manolas.

The proud owner of a €36m release clause in his contract, the Greek centre-back looks set to leave the Italian capital in the summer, and a move to the Premier League could present itself to him. 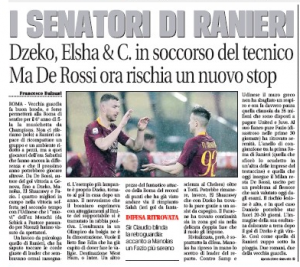 According to Leggo’s Rome edition, both Manchester United and Juventus are said to be ‘ready to pay’ the aforementioned amount to secure his services.

Roma are a bit ‘scared’ about this, but without his agreement to a renewal, which has yet to come, there’s not a lot they can do.

There’s no detail about where in Ole Gunnar Solskjaer’s list the Greece international is, but our guess is somewhere near the top, especially since we all know Ed Woodward likes to save money if he can.

Manolas might not be Kalidou Koulibaly or Virgil Van Dijk, but we doubt there will be many Manchester United fans complaining if he ended up overtaking Phil Jones/replacing Marcos Rojo in the club’s pecking order next season.

He might have to fight Tahith Chong for that number 44 shirt, however.