David de Gea is under pressure to perform for Spain at the World Cup and live up to all the plaudits he receives in England.

There still seems to be at least a slight distrust of the goalkeeper and his level, like he has to show he’s world class for Span repeatedly before the country will completely buy his status.

A poor performance in a recent friendly led to more doubts than it probably should have done and whilst the Manchester United player is easily first choice, for some reason it feels like he doesn’t have the same respect in Spain as in England.

That may be one of the reasons why De Gea looked kindly upon a transfer to Real Madrid, with the deal ultimately failing at the last minute. As legend has it, Ed Woodward’s transfer fax machine was the cause of the problems which led De Gea to stay at Old Trafford.

Speaking to AS, and being pressed on a transfer, the goalkeeper was asked whether Manchester United have fixed the fax machine. De Gea laughed, and said: “It’s fixed. But it can also go by mail.”

Asked if there’s a chance of a transfer, the 27 year old sat on the fence: “The important thing now is the World Cup, you can’t think about anything else that can divert your attention. You have to be focused, it is important to make a good World Cup, we are all good.”

On if he’s asked his agent not to bother him if there’s an offer during the World Cup, De Gea said: “Football is football and a thousand things can happen. But I’m always calm and, come what may, I’ll be the same and I want to be one hundred percent focused on the World Cup.”

Let’s be honest, Manchester United fans, whilst this isn’t David De Gea talking up a transfer, it’s certainly not him talking one down either.

Given the price tag he’s earned himself, it would be a very expensive transfer for any club to pull off. 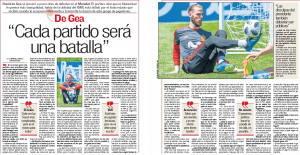 Real Madrid would be the obvious option, and with Keylor Navas’ biggest fan, Zinedine Zidane, leaving it’s potentially a likelier route than it was a month ago.

This isn’t a transfer opportunity being talked up in Spain, so there doesn’t seem anything for Manchester United to worry about. Yet.