Home Europe Man United player only has one destination in mind – Has ‘refused...
SHARE

As you’ll be sorely aware by now, AS Roma still haven’t managed to convince Manchester United to let Chris Smalling return to the Serie A club.

The Premier League side continue to be stubborn about their €20m or so asking price, which the Italians are refusing to meet.

There’s a reason for that, mostly his age, and the fact he himself desperately wants to move back to the club that helped him rekindle his form over the past season.

That’s what Corriere dello Sport are suggesting on Tuesday, explaining Smalling has ‘refused other offers received from the Premier League because he is waiting for Roma’.

A new proposal was made by the Italian club’s CEO, Guido Fienga, last week ‘bringing the offer to €14m’.

That’s short of the asking price, but with the player ‘pushing’ for a move to Roma, there’s a belief ‘an agreement will be found halfway’ and ‘in a few days everything will be clearer’. 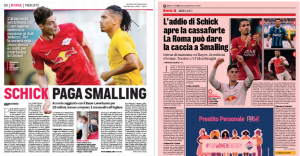 This is somewhat backed up by Gazzetta dello Sport, who state Paulo Fonseca and co. ‘would like to spend no more than €17m, including bonuses’, which is funnily enough the midway point between €14m and €20m.

All this comes from the fact Roma appear close to selling Patrik Schick to Bayer Leverkusen, meaning money (around €29m with bonuses) will soon be in their bank.

It’s certainly a positive development, but we all know how these things go, so until there’s anything more concrete, Smalling remains a Manchester United player.