Normally at the centre of most big Serie A clubs’ transfer plans without ever going leaving Old Trafford, Matteo Darmian’s name has only appeared very sporadically this summer (so far, at least).

However, this could very quickly change, according to Gazzetta dello Sport, as they explain that with no counterpart expected to be included in the Joao Cancelo to (most likely) Manchester City deal, the Manchester United wantaway could be targeted.

The newspaper report the 29-year-old has ‘once again’ asked the Red Devils to let him return to his home country, especially since his family has now welcomed a new addition.

Juventus are said to be following Darmian for ‘a long time’, which everyone already knows, as have Inter, who could scupper a deal for the Italy international. 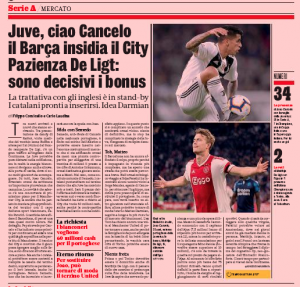 Prior to joining the Premier League club, the had spent four years in the city, first arriving on loan from Palermo in 2011 to then sign permanently for Torino in 2012 for £2.1m.