Often very interested in a number of Lyon players over the years, as well as signing a few, Tottenham have decided to take a closer look at where some of the Ligue 1 side’s recruiting came from.

Securing the services of Tanguy Ndombele for a record fee this week, Spurs have also, in the past, bought (with stark contrasts of success) Clinton Njie and Hugo Lloris from the French club.

One of the key assets in Lyon’s recruiting department has been, since 2009, Florian Maurice, who is now in charge of the scouting/transfer committee in the south of France.

However, the former striker’s influence seemed to diminish recently as Jean-Michel Aulas appointed Juninho Pernambucano as director of football, who went onto appoint Sylvinho to replace Bruno Génésio.

The arrivals of both Jean Lucas and Thiago Mendes only appeared to emphasise who was in charge in the scouting/recruiting these days, which Maurice didn’t appreciate. 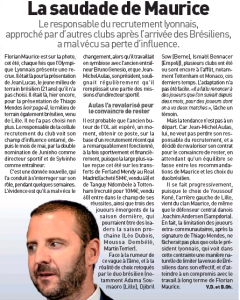 L’Equipe reveal that a number of teams have been taking an interest in Maurice, among which are Tottenham and Monaco.

As France continues to produce more and more talent, to see Spurs target a man who has a great record of finding young players Lyon have then sold for huge profits (Ndombele and Ferland Mendy the latest examples) makes a lot of sense.

However, the French newspaper do explain Aulas has no intention of losing his man, and has already decided on giving him a new deal, waiting for the early Brazilian influence to die down.

That, in itself, is already happening, as both Youssouf Koné from Lille and the potential arrival of Joachim Andersen from Sampdoria have come from Maurice’s camp, suggesting a balance will eventually be found down the line.

Tottenham remain interested, but getting the talent finder from Lyon is likely to be a bit more difficult than first anticipated.