Manchester United are evaluating the possibility of trying the signing of Sporting youngster Nuno Mendes this summer, according to claims from Portugal.

Newspaper A Bola today features a story explaining that with Alex Telles’ recent injury, the Red Devils now wonder if they should add a new left-back to the squad.

The club still don’t know how long the Brazilian will be sidelined, and with Luke Shaw now being their only option for the position, Mendes’ name is back on the table.

Manchester United have known the 19-year-old for a long time, and that’s why A Bola say he’s ‘well referenced’ at Old Trafford, with the Red Devils’ officials being ‘perfectly informed’ about how much it’d take to sign him this summer. 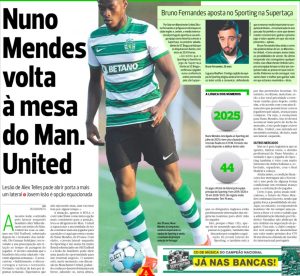 A Bola points out that Manchester City, who recently denied their interest in the player, haven’t ruled out his signing yet. But to make that investment, they depend on sales, and that’s why an effort would only be made at the end of the summer window.

That’s an advantage for Manchester United, whose board are discussing the need for another left-back ‘at this moment’. Nuno Mendes is protected by a release clause of €70m, and the newspaper says only an amount very close to that will convince the Lions to sell him now.

Making a €70m signing to cover a relatively injury loss makes zero sense whatsoever, and it’s clear Sporting are trying to get Nuno Mendes’ name back out there.

That said, the youngster is extremely talented and whilst €70m is likely too much, they’ll probably get a big fee for him sooner or later.