That’s according to De Telegraaf, who state the manager has explained to the Red Devils that the arrival of the La Liga midfielder is ‘crucial’ for developing a new style of play.

De Jong and his agent, Ali Dursun, have been staying in the background for weeks. That United have made an offer is a signal the 25-year-old is open to moving to Old Trafford.

Barca are looking to cut ties with the Netherlands international in the ongoing window. This means the door is half open, while the former Ajax man and his representatives are playing the game very well.

If De Jong were to force for a move, he makes his own negotiating position difficult and also puts pressure on United to pay more money to Barcelona.

Instead, the Dutchman insisted he is happy at the Camp Nou and if Xavi Hernández’s side want to push him out, then they have to find a compromise with Manchester United over the transfer fee.

The newspaper states: ‘Barca’s overall financial situation plays a role in the background, because next week the club has to hand in the books to La Liga. After that, it is determined what amounts the club can spend on the transfer market in the coming season.’

De Jong’s sale to Manchester United before the end of this month can help the Blaugrana to balance their books.

Meanwhile, Ten Hag believes two new midfielders, familiar with his attacking principles, are crucial for a ‘radical and much-needed turnaround’ at Old Trafford. The first is De Jong and the second one must be Eriksen, say De Telegraaf, who is now without a club after leaving Brentford.

The Denmark international trained under Ten Hag at Ajax before joining the Bees on a short-term deal in January. He is also aware of the Amsterdam club’s style since he represented them in the past. Therefore, Eriksen becomes an ideal signing for United.

Manchester United’s focus has been on these two players, mainly because of Ten Hag’s insistence, as he believes the duo can be ‘decisive’ for the Red Devils.

Meanwhile, Mundo Deportivo state the club continue to press for the Dutchman as Barca are open to studying offers between €80m and €100m. The Premier League side want De Jong to be their ‘franchise player’ as he is the priority target for Ten Hag. 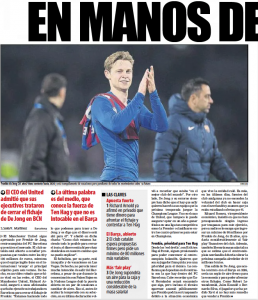 It’s said the ex-Ajax man’s exit will be a ‘breath of fresh air’ for Barcelona since it will help them raise funds and also lower their wage bill.