When the idea that Boubacar Kamara could leave Marseille on a free at the end of the year started to become more and more concrete, Manchester United wasted no time in putting their name forward.

The Red Devils were among the first linked for the young Frenchman regarding a potential free transfer, after the likes of Wolverhampton Wanderers and Newcastle United failed to convince him of a move last summer.

He wanted to play in the Champions League with his childhood club, which was completely understandable, but he has also rejected a number of renewal offers from the Ligue 1 side over the past few months, unhappy at how they spent their money over the summer, as well as feeling like they undervalued him a bit.

This has led to him most likely leaving on a free once his current deal expires, and AS Roma have been heavily linked with him in Italy. 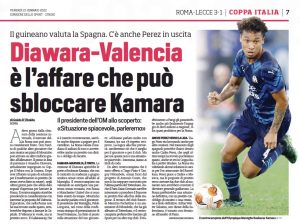 We say this because Corriere dello Sport look at the possibility of an early transfer taking place in the final days of the January transfer window, with the newspaper explaining ‘the midfielder is considering whether to anticipate an obvious departure’, meaning leaving this month rather than in the summer.

That would, of course, require a club to pay Marseille a fee, albeit far more minimal than it would have been last summer.

That’s when Manchester United are mentioned, as it’s stated that both Roma and the Old Trafford side have ‘come forward for some time’ to try and convince Kamara to choose them.

Should the right offer come in January, there’s definitely a chance that Marseille would accept since they need the money, but they would only likely do so if the player also gave the green light for the move.

We’ll have to see what comes of this, but it appears Manchester United are sniffing around what could be a smart signing, since the 22-year-old can play either in defensive midfield or a bit further back in the heart of the defence.