Barcelona’s failure to meet Inter Milan’s demands stopped Lautaro Martínez from moving to the Camp Nou in the last window.

The La Liga side have now been joined by Manchester City in chasing the forward, according to Sport on Tuesday.

Gabriel Jesus and Sergio Agüero are the only two out-and-out strikers at the Etihad and the Argentine is in his final year of contract, which is why it’s stated the Citizens will prioritise signing a new striker after this season.

Pep Guardiola has identified Martínez as a priority option and Borussia Dortmund’s Erling Haaland as his second-choice target.

The Premier League club’s arrival at the scene for the 23-year-old Argentine will ‘become an unexpected problem’ for Barcelona.

Martínez’s name has been filtered at City as Paris Saint-Germain’s Kylian Mbappé is out of reach for them.

Sport states Guardiola’s side will have ‘more and better arguments, and not only economic’, to convince the South American to snub Barca and Real Madrid. And this is where Agüero holds the key, states the newspaper. 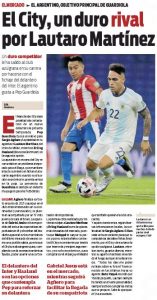 As per the report, Agüero’s continuity would be good for Martínez to ‘decide to sign for City and discard the Barça option’.

The Inter player, for his part, remains silent, while his agent keeps talking to press, without giving away much of Martínez’s future plans.

Sport, however, doesn’t clarify whether Martínez would still favour joining City if Agüero decides to leave the club as a free agent next summer.