On Tuesday, we covered a discussion that took place over in Belgium regarding Vincent Kompany and whether or not he should be picked by Roberto Martinez for the World Cup even if he isn’t 100% fit.

The general consensus was a ‘no’, as other teams who have done so, like France, have regretted their choice, but for the player himself, making that team is what this season is all about, and he’s as motivated as ever.

Originally called up by Roberto Martinez, the Manchester City defender was sent home because of his lack of fitness and calf injury, but that won’t stop him.

Speaking to Le Soir over the weekend, the centre-back explained he’ll do everything in his power to be on that plane to Russia.

He said: “For me, it’s an unmissable objective. Football remains my passion. I’ve been in it since I was six and want to get the most out of it. Playing in Russia is the reason why I keep smiling during all these difficult times. I have complete faith in this generation. 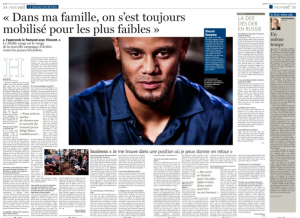 “I won’t stop football after the World Cup, certainly not, but there’s a good chance I’ll retire from the national team. All these years, I’ve done everything to stay fit and always come back from injury. If I feel I need to make a choice for my body, then I’ll do it without hesitating.”

Having already done so much for his national team up until now, the Manchester City defender would love to walk away from international football a world champion.

Why? “Because I don’t know how much longer I’ll last and I don’t even know if I’ll still be able to run (laughs).”

Feeling the best is yet to come for this Belgium team, filled with experience and talent, the Manchester City defender feels there are no more excuses when it comes to tournaments.

First, however, he’ll need to put all this injury trouble behind him, and that seems to be the hardest thing for him to do.