Arsenal star Alexis Sanchez has reportedly presented himself to the Chilean national team with a minor injury.

As reported by El Mercurio this Tuesday, the forward was the first player to arrive at the training centre yesterday morning, but wasn’t able to train.

Sanchez visited the Chilean doctors and told them he was feeling pain in one of his legs, due to a knock from the weekend’s Premier League game against Brighton. 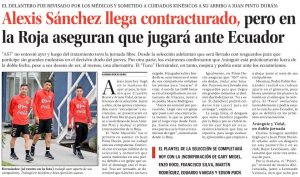 After being examined, there wasn’t any big concern about the player, but the doctors thought it would be better to go easy with him so he can start the decisive game against Ecuador on Friday.

That’s why Sanchez didn’t do any work with the squad, left the training centre with his car and was later seen at a restaurant, as a clear sign that he took the rest of the day off.

El Mercurio has some quotes from the Chilean FA, who are making everyone calm by saying their Arsenal star will be fit for the match.

“Alexis did not train for precaution. He arrived with a blow that happened to be a minor contracture, that was enhanced by the long trip from Europe. He feels a discomfort in one leg and the rest treatment was made. “

“He’s going to be [at the game]. He preferred to take care of himself today so he would not risk it.”

Currently in sixth place in the qualifiers, Chile wouldn’t get a World Cup spot now, as four teams get the straight qualification and the fifth, who are currently Argentina, get the playoff spot.

So there’s a lot of work to do in these two final fixtures, and losing Sanchez would be a huge blow. That’s why he can have all the time off he needs.