The centre-back has a year left on his contract and Barcelona are keen on bringing him back to the club this summer.

Mundo Deportivo journalist Miguel Rico once again discusses the La Liga club’s interest in the defender, and also focuses on young talents who left the Citizens in the past few years.

This includes 16-year-old Charlie McNeill, Jadon Sancho’s exit from the Etihad, Brahim Díaz, and they even mention Leroy Sané’s switch to Bayern Munich.

City tried to retain these players, but their desire to move elsewhere saw the club cut ties with them.

Rico states the departures of the aforementioned players ‘explains the philosophy’ of the English club, that with Ferran Soriano, Txiki Begiristain and Pep Guardiola, they are following ‘another essential aspect of the Cruyff philosophy’.

The philosophy is that the commitment from the player should be unquestionable. If a player is not interested or if his head is elsewhere, he can no longer give his best. In such cases, ‘it’s best to find a solution’.

According to Rico, City are ‘at a crossroads’ with García. The Premier League side have offered him an improved contract, whilst Barca’s technical leaders want to sign the 19-year-old.

Quique Setién’s side have held talks with his agent Iván de la Peña, and from that they have found out the teenager is ‘seduced’ by the idea of joining the Blaugrana.

The Catalan club feel the Spain U21 international wants to leave City, just like the past cases with Sancho, Brahim and Sané. Therefore, it’s logical for Soriano, Begiristain and Guardiola to think about sanctioning García’s sale. 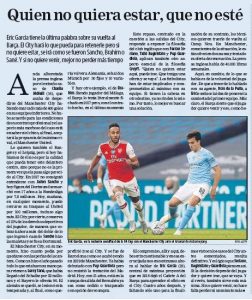 Mundo believe City should follow the philosophy the newspaper have decided they have.