Reinier has grabbed the attention of top European clubs after making his senior debut for Flamengo in July.

The 17-year-old has four goals and two assists in 12 appearances and is being ‘followed’ by several sides, including Manchester City and Arsenal.

This is according to Friday’s edition of Catalan newspaper Mundo Deportivo, who explain the attacking midfielder’s father has made a trip to Europe to look at potential suitors for his son.

It’s claimed the Premier League winners and the Gunners have ‘contacted’ Reinier’s father, along with Real Madrid, Juventus and Paris Saint-Germain. However, Atlético Madrid are the club who remain ‘most interested’ in the teenager. 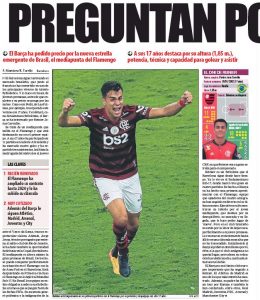 The player committed his future to Flamengo by signing a new five-year deal earlier this month and on November 9th, Globo Esporte reported his release clause is now set at €70m.

It remains to be seen if either Manchester City or Arsenal can overcome competition from other European clubs to sign Reinier.