Liverpool are ready to rival Barcelona for the signing of Sevilla defender Diego Carlos this summer.

Carlos has impressed for the Spanish side this season, becoming a key player under manager Julen Lopetegui.

Sport report that his performances have not gone unnoticed inside and outside of Spain, with Barcelona particularly keen on his signature.

They are keen to add to their defence this summer and Jürgen Klopp has identified Carlos as the ‘perfect’ signing, believing he is a player who is ready to make the step up to the Nou Camp.

They like both him and teammate Jules Koundé, but it is the Brazilian they will target but his price tag, €70m, makes him a hard deal to get done with finances tight as a result of the Coronavirus epidemic.

Barça neither wants nor can afford to pay such a price, mainly as they intend to spend much of their money on improving their forward line.

They hope that they can use Ivan Rakitić as part of any deal and bring Carlos’ price down, but even if they do, the player will also be the one to decide his future.

And that could see Barcelona miss out as they are not the only ‘big European club’ interested in his signature; Liverpool are also keen. 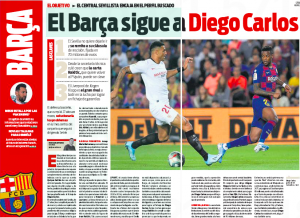 Jürgen Klopp’s side have ‘taken notice’ of the defender’s performances, and the German believes he would be an ‘ideal’ partner for Virgil van Dijk.

There is also a feeling that the player would be a ‘perfect fit’ for the Premier League, particularly in a physical sense.

They have ‘plenty of financial potential’ so can afford his €70m release clause, with the paper pointing out it wouldn’t be the first time they’ve paid an ‘astronomical sum’ for a defender having done the same to secure Van Dijk ahead of the competition in 2017.