Considering his importance to the Reds, it’s almost inconceivable that Liverpool would ever sell Mohamed Salah in the summer, especially with qualification to the Champions League next season already a near guarantee.

Then again, nothing is ever certain in football, and a well-placed, very large, bid from a prestigious club (with a bumper contract to boot) could potentially sway the Egypt international.

We’re not saying that’s going to happen, far from it, but Gazzetta dello Sport reckon Liverpool know who they would ‘concretely move’ for if Salah were to ever leave the club: Federico Chiesa.

The information comes as part of a lengthy article regarding the Fiorentina starlet’s future, who is top of the list for Juventus, as Gazzetta give him a 40% chance of heading there. 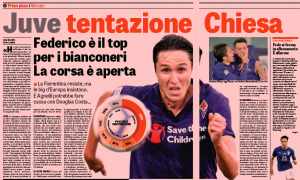 Likely leaving Fiorentina at the end of the season, the 21-year-old is then given six different 10% destination on the pie chart: Milan, Paris Saint-Germain, Bayern, Inter, ‘other’ and, of course, Liverpool.

The price, should the Reds ever reach that stage, is expected to be around €60-70m, which, in today’s market, isn’t awful by any means.

We doubt things will ever get that far when it comes to Salah leaving, but if it does, there are worse options than a 12 goals and eight assists in 31 appearances winger who still has time to develop.

Jurgen Klopp would appear to have a back-up plan, at least according to Gazzetta.

Club ‘ready to welcome’ Manchester United player – Waiting for his...

Crystal Palace talks for €20m+ player ‘seem rather advanced’ – ‘Should...