Until they sign a new centre-back, Liverpool will continue to be linked with centre-backs.

Unfortunately, that’s just how the transfer rumour mill works, and the latest name to be linked with a move to Anfield is none other than Stefan De Vrij.

The name is one Liverpool fans will know all too well, as they were one of the many clubs often linked with the Dutchman back in 2018 when an exit from Lazio was on the cards.

The defender eventually chose to stay in Italy by transferring to Inter, but it seems the player hasn’t disappeared from Jürgen Klopp’s radar.

That is, at least, what Corriere dello Sport would have you believe, explaining in their Thursday edition that ‘an indiscretion from Holland’ suggests Liverpool, Manchester City and Paris Saint-Germain would all be ‘prepared to present an offer’ for the player.

While that’s all well and good, there’s Inter’s view to take into account, which the Italian newspaper are more than happy to give their readers. 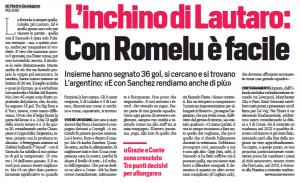 They explain De Vrij has become a fundamental part of Antonio Conte’s plans, with a contract keeping him there until 2023, and talks of a new contract ‘have already been done’, waiting until the end of the campaign to really throw themselves into it.

Corriere then sign off by explaining that while that’s the plan, ‘it remains to be seen whether a particularly substantial offer could change’ things.

We doubt it, but money always talks in football.