Once upon a time there was one major football transfer rumour which regularly dwarfed all others, and the move made sense.

Kevin Strootman to Manchester United became a living organism. If it were a planet it would have had moons orbiting it.

Of all the rumours to come and go over the past decade, Strootman to Old Trafford was one of the very biggest. Wesley Sneijder may stick more in the memory, but it was arguably Strootman who had the strongest Manchester United links.

It didn’t happen. Injury and circumstance saw Strootman miss out on Manchester United, but he was also linked with other English clubs.

One of those was Liverpool… and now that story is back.

Italy’s Premium Sport report that Liverpool have made some contact over signing Strootman. Everything sounds like it’s at a very early stage, and if there’s truth in the Liverpool claims then there’s a long way to go from here, but it’s possible.

Liverpool potentially losing Emre Can is said to be a motivation, and it’s claimed things could get serious very quickly if Jurgen Klopp’s side put a concrete offer in. 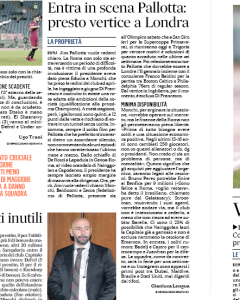 This all comes on the day Il Messaggero report Strootman ‘would like to leave’ Roma, but the club aren’t keen to let him go. The Italian newspaper also report Roma are set to have a summit in London over the next few days, which will be related to transfers and potential spending, with a likely sell-before-buy policy.

London is the location because Roma’s owner will be in the city for a basketball match on January 11th, but expect to see a whole series of transfer rumours related to it.

There’s no way this Strootman rumour can continue with just Liverpool involved, Manchester United need to be dragged into it… if only for old times’ sake.