Jasper Cillessen has always been a back-up for Marc-Andre ter Stegen since he joined Barcelona from Ajax in 2016.

The Dutch international has seen his first team opportunities being limited at Camp Nou., but whenever he has been given an opportunity to start, the 29-year-old has managed to impress with his display.

Today’s edition of Mundo Deportivo claims Cillessen is happy with his current employer, but his desire to become a first choice goalkeeper has convinced him to leave the club.

Even though his priority is to continue with the La Liga winners, he wants to evaluate the bids he receives this summer.

Several Premier League clubs have ‘called’ Barcelona for their custodian and one among them is Liverpool, with the Dutchman ‘studying’ the offer.

If Cillessen decides to accept the offer, then he will make a switch to the ‘major club’ to become the first choice stopper. 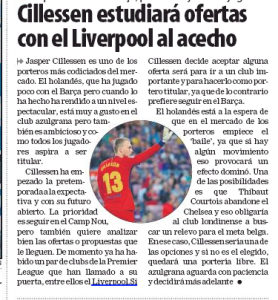 Cillessen is also aware that several goalkeepers could move in the transfer window, causing a ‘domino effect’. One of the possibilities is Thibaut Courtois leaving Chelsea and the Barcelona man wants to wait and see if can emerge as one of the options for the Blues.

Liverpool are by far the club who have been linked the most with Cillessen this summer and a move to Anfield would make sense.