Barcelona defender Yerry Mina has been on the radar of the Premier League clubs following his impressive performances for Colombia, which included three goals at the 2018 World Cup.

The centre-back moved to the Camp Nou from Brazilian club Palmeiras for €11.8 million in January. After spending six months with the La Liga winners, Ernesto Valverde has decided not to include him in his plans for next season, explains the front page of Catalan newspaper Sport.

Clement Lenglet has already left Sevilla and completed a switch to Barcelona. The Frenchman’s arrival will see Mina drop further down the pecking order behind Gerard Pique, Samuel Umtiti, Lenglet and Thomas Vermaelen.

The report claims Barcelona have three offers on the table from three English clubs – West Ham United, Leicester City and Everton – for Mina. All of the bids received are above €30m, meaning the La Liga winners can end up earning much more than what they paid. 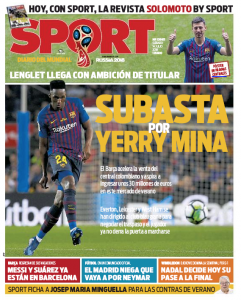 Mina will no longer be on the Spanish champions’ books in the next few weeks. He is currently on a holiday and is expected to join his current teammates at the pre-season tour of the United States.

Sport claims Barcelona are planning to close the sale of their player when he arrives in the United States. Amongst West Ham, Leicester and Everton, the Toffees are believed to be leading the race for Mina.