Late on Thursday, it was revealed by France Football that Chelsea had started sniffing around Layvin Kurzawa.

The French magazine explained the Blues had recently reached out to the Paris Saint-Germain defender’s entourage about a potential move this summer when the player will be a free agent, and the interest was received favourably.

However, it was made clear Kurzawa wanted to first know what Chelsea’s intentions were, as he knew both Marcos Alonso and Emerson Palmieri already occupy his role in the squad.

Well, we speculated this could mean one of the two could be on their way out, and Luca Marchetti, a journalist for Sky Italia, reckons it’s the latter.

He said in an editorial for TuttoMercatoWeb and relayed by Area Napoli: “Juventus and Inter are already well informed for months about Emerson Palmieri, whom Chelsea wanted €40m for in January.

“Today, the slightly lower prices could help. Maurizio Sarri and Antonio Conte know him well and would like him after having studied him and valued him at Stamford Bridge. Will he leave? It’s very likely because Chelsea are looking for someone on the left”.

That last bit isn’t exactly news, as reports from both Portugal and France also suggested Chelsea were interested in Alex Telles, needing to fight Paris Saint-Germain for his signature. 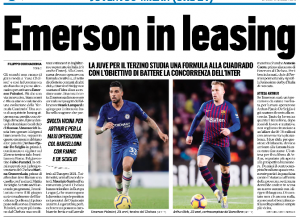 Kurzawa would be free, but Telles would cost around €30m, and if Marina Granovskaia can get something similar for Emerson Palmieri, then all the better.

This is also echoed to some extent by Tuttosport, who claim on Friday the defender is moving ‘further and further away’ from Chelsea, but that before Juventus can make a move, they need to get rid of Mattia De Sciglio.