In the long list of clubs where things are going drastically wrong, Monaco rank quite highly at this moment in time.

Things have been going badly for the club for some time, and at the moment, there seems to be no imminent return to their former glories.

They sit 19th in Ligue 1 after five games and manager Leonardo Jardim is under increasing pressure, with former Leicester City manager Claude Puel being lined up to replace him, according to L’Equipe.

The Frenchman has been out of work since leaving the Foxes last season but is now being eyed up as the man to rebuild Monaco’s fortunes.

According to the newspaper, the fact Puel lives nearby, is a free agent after his sacking by Leicester and has the ‘profile’ to restructure the club all appeal to those in charge.

And should he end up at the Stade Louis II it will mean an awkward reunion with two players who he had at Leicester City.

Adrien Silva and Islam Slimani were both at the King Power stadium during Puel’s reign but, like many of the Leicester squad under his leadership, didn’t have the best of times.

Silva featured 21 times under the Frenchman with 12 coming in the Premier League. However, he found himself ostracised from the squad, failing to appear in any of Puel’s Premier League squads after the 29th of September. 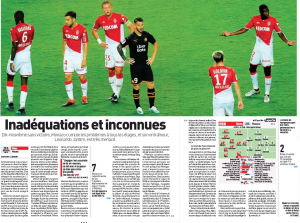 Slimani fared even worse, making eight appearances under Puel during his time at Leicester City, and starting one Premier League game in that period.

Indeed, both players’ careers were seriously held back during their time under the Frenchman, and it will be interesting to see how they respond should he end up as Monaco’s new boss.

On the face of it, it’s hard to see that not being an awkward and challenging reunion for all parties.