This summer was something of a busy one for Atlético Madrid, as the club underwent an overhaul of the playing squad.

Big names, such as Antoine Griezmann, Lucas Hernández and Rodri departed with the likes of João Félix, Marcos Llorente and Mario Hermoso arriving to replace them.

One man who didn’t join the club was Chelsea’s Marcos Alonso, although it seems they made every attempt to make that happen.

According to Marca, Atlético were very keen on the Chelsea left-back this summer as they sought out a replacement for the departing Filipe Luis. 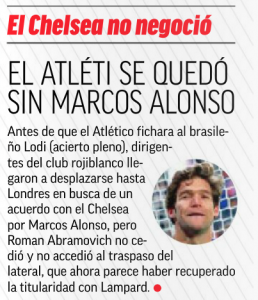 They approached Chelsea about a move for the Spaniard, who did not enjoy a great campaign under Maurizio Sarri last year, but were rebuffed by the Blues.

That was because Roman Abramovich refused to sell the left-back, with Marca reporting that he would not ‘yield’ amid Atlético’s attempts to make a move happen.

They instead signed Renan Lodi from Athletico Paranaense, with Alonso now fighting to make the left-back spot his own under new manager Frank Lampard.