It’s been said that with José Mourinho willing to sign Ricardo Pereira for Tottenham, the Foxes see Buta as a possible replacement.

Now Portuguese newspaper O Jogo brings a big piece about it today, mixing their own claims with what’s been reported elsewhere.

They’ve taken those same reports from Belgium, and then confirmed that Buta has been followed ‘with big attention’ by the Foxes. 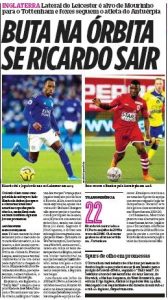 But Leicester City aren’t the only club who want to take him to the Premier League, since Southampton, Watford and Wolverhampton Wanderers are all said to be interested as well, O Jogo says.

The outlet points out how ‘curious’ this is that José Mourinho wants Pereira to replace Aurier, because Tottenham only signed the Ivorian player because they couldn’t win Leicester City in the race for Pereira back in 2018.