Home Championship AFC Bournemouth “That should have been me…” – Player talks about his failed spell...
SHARE

Bournemouth fans, let’s take you back to 2015, back when Max Gradel had just got injured and things weren’t looking great for the club’s first season in the Premier League.

The Ivory Coast international ruptured his knee ligament four games into the season after a £9m move from Saint-Etienne, and while he returned towards the end of February, he was never quite the same for the Cherries after that.

He eventually returned to France with Toulouse, but there was one player on trial at Bournemouth at the time who could have and should have stepped up.

His name was (well, it still is) Jeremi Kimmakon, now playing for Les Herbiers in France’s third-tier.

Speaking to Ouest-France, he said: “Max-Alain Gradel ruptured is ligaments. The club were looking for someone to replace him. On paper, that should have been me…” 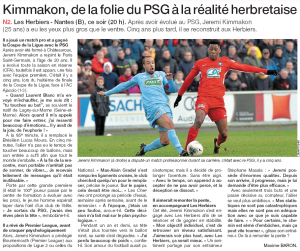 The French newspaper explain Bournemouth kept extending his trial every week, but, in the end, they decided to let him go.

He explained: “At the time, I was a bit crazy. That decision [to let him go] hurt me psychologically”.

After that, he lost one and a half years of his life, never really focusing on football, losing weight, and nearly losing his love for the game.

It was then that he decided that even if he didn’t make it at the top level, he could still enjoy himself on a football pitch and continue his passion away from the pressure at the top, which is what he’s now found at Les Herbiers.