It’s been a while since these rumours disappeared, but Porto striker Moussa Marega is back being linked to Premier League clubs this week.

With the player showing some great form in the Champions League, newspaper Correio da Manhã says English and Italian sides are interested in signing him.

There are only two clubs who are named in the story, and that’s Leicester City and West Ham United. Correio da Manhã says both Premier League sides have some ‘old love’ for the 27-year-old.

The recent noise about the player is because of his great form in the Champions League, where he has six goals in seven appearances, with even UEFA highlighting his achievement of scoring in six consecutive matches. 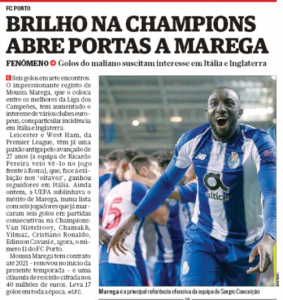 Marega has recently renewed his contract with Porto, but his release clause, which is of €40m, doesn’t seem like too big for either Leicester City or West Ham.

The player has a total of 17 goals and 10 assists in 34 appearances for Porto this season, and could be leading the club to a consecutive league title.