Leicester City seem to be focused on transfer business in Portugal for the next transfer market.

After signing Islam Slimani from Sporting and also being frequently linked to other players from the Lisbon club, it was time for Leicester officials to take a look at the other side of the town and watch Benfica playing Porto this weekend.

The result was a 1-1 draw which kept Benfica’s one-point advantage at the top of the table, as Porto missed the chance to overtake their rivals.

Leicester haven’t been strongly linked. Their scouts have already watched Benfica this season, but their target was never identified.

From the realistic targets in the game, Benfica players Pizzi and Jonas were those who did well for the red side, and the latter scored the opener early in the match. On Porto’s side, besides Iker Casillas, winger Yacine Brahimi was the best on show. Right-back Maxi was responsible for the equaliser. 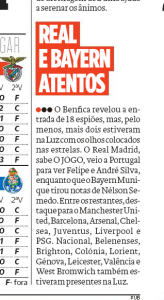 As the match was of great interest to European sides ahead of the transfer window, O Jogo report it was attended by scouts from Arsenal, Chelsea, Koln, Inter Milan, Barcelona, Lorient, Genoa, Juventus, Liverpool, Manchester United, Marseille, PSG, Valencia and West Brom too.

As Leicester City faced Porto twice in the Champions League group stage, someone may have taken their fancy.