Colombia were eliminated from the 2018 World Cup by England in the quarter-final as the Three Lions overcame the South American nation by beating them in a penalty shootout.

Barcelona defender Yerry Mina was arguably the star man for José Pékerman’s side in the recently concluded Fifa tournament in Russia. The 23-year-old scored three goals in three different games and played a vital role in helping Colombia qualify for the knockout stages.

Mina is currently on holiday as the majority of his club teammates have already started the pre-season training. Ernesto Valverde and his men will travel to the United States for their tour and there are several players that could be sold and miss the trip.

The former Palmeiras man is one who Barcelona are looking to offload, according to Catalan newspaper Sport. The defender originally had no plans to leave the La Liga winners this summer, therefore he’s being encouraged out the door.

Mina is attracting interest from the Premier League with Leicester City, West Ham United and Everton all believed to be interested in the player. The three English clubs could start an auction for the Colombian international and this will only come as a good news in the offices of Barcelona. 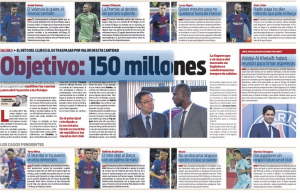 Leicester have also been mentioned in Colombian reports about the player, and whilst they don’t seem to be a frontrunner right now, they’re hanging on in the rumour.

Should Fixes links be the result of transfer rumours surrounding Harry Maguire, then the club’s fans will want them to disappear rather quickly.